The Joys of Travel

Travel Challenge #1 I wrote last week about the challenge I had getting from Memphis to Dulles airport, a trip that ended up taking fifteen hours and included several delays and a diversion from the planned stopover in Houston to Baton Rouge. Little did I know that would be the first of several challenges our team had during the week. Travel Challenge #2 I also wrote about the suitcase that got lost on the way to Kombolcha from Addis, ironically the only suitcase we had to pay for because of the extra bags we had. Fortunately, that one came in the next day but cost Cassidy the chance to meet the mother of the child she sponsors. I’ll come back to travel challenges in a bit. (insert cliffhanger music here) We woke up early Saturday morning for a quick team picture before heading to the airport for a quick flight back to Addis Ababa. Last year, our flight back to Addis got canceled and we had to make quick arrangements for a long, adventurous drive that involved a driver
Post a Comment
Read more

All Good Things Must Come to an End 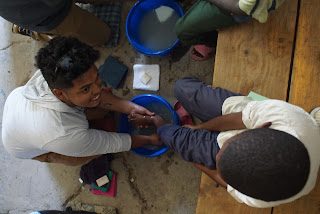 I am 30000+ feet over the Atlantic Ocean, on my way home after a great, but tiring week. I am woefully behind in my blog entries. Friday, our last day at the care points, was all that we had hoped for. It was joyous, exhilarating, fun, and emotional.  The day started at the CHDA. Max was set to interview one of the college students from Meserete in the park, so while we waited for him and Sean to return, we played games with the children. One of the boys walked over to me and let out a long boisterous (Toommmm!), to which I replied (Abelllllll!). It became a running joke fo the rest of the morning, the two of us going back and forth drawing out each other’s names, sometimes with a funny voice. Others joined in, so there was a near constant chorus of “Mohammeddddd!”, “Tamelllllll!”, “Abellllllll!”, “Tommmmm”!) A little silly, but when you don’t speak each other’s languages, it was a way to connect. I also played A LOT of Connect 4. One boy was bound and determined to beat me. .
Post a Comment
Read more

What a Wonderful, Incredibly Fantastic Day 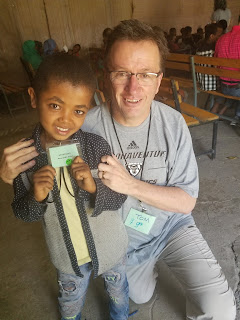 Yes, it's almost 1:00 in the morning here in Ethiopia, but today (yesterday)  was such an amazing day, and tomorrow (today) is going to be equally powerful, I wanted to be sure to share it while it's fresh in my mind. Our day started at CHDA, the care point with the younger children. We knew that there would be fewer in attendance today because many of them would be taking school exams. Indeed, the crowd was light. Rather than get into the program right away, we spent about 45 minutes just "hanging out", giving those taking exams time to participate in at least part of the day's events.  I played Trouble, Connect Four (yes, I am the champion at this game so didn't have any problems), soccer, and a little volleyball mixed in. Moses did his lesson and then we had time to spend more time playing. One of the families we've met in Tennessee told Lori last night that they wanted to sponsor a child and asked her to take a picture with one to send. Below is the
Post a Comment
Read more

By tclaughner - May 08, 2019
As of this year, there are no more home visits. They were causing all sorts of problems for the families we were going to see, including jealousy from neighbors and increased rent from landlords who thought that since Americans had come to visit, they had extra money. As wonderful as it was to go see families in their homes, the last thing we wanted was to create additional hardships. In place of home visits, Children's Hopechest created the concept of "Community Day". On Community day, the parents come to the center so the team can interact with them and get to know them so that their stories can be shared with their sponsor families. I was asked to give a brief talk about parenting, but since Kombolcha is predominately Muslim, and most of the parents are Muslim, to avoid any overt Christian messages. I also felt it would be presumptuous of me to suggest how to parent so tailored my message towards the children about honoring them, and the sacrifices parents ma
Post a Comment
Read more

They're Getting So Big!

By tclaughner - May 06, 2019
May 6, 2019 Another great day in Ethiopia. We were up out of bed at 4:30 this morning in order to get to the airport for an 8:00 flight. Turns out that even though the five guys are sharing the same room, we didn't know that none of us were really sleeping. I, for one, know that others were sleeping because I was hearing snoring in Dolby 5.1 surround sound. In full disclosure, I was told I was doing a bit of the log sawing myself throughout the night. So I lied about the barking dogs and snoring roommates. Turns out they were really enough to wake me up and keep me awake. Add in some feral cats, aircraft flying overhead, and the worrisome sound of a mosquito buzzing around my head and it was enough to keep me awake. Needless to say, as I type of this, I'm running on fumes. I'm going to post this tonight just so I can get it out, but if something doesn't make sense, blame it on an extremely long day. Time is not something Ethiopians seem to take very seriously,
Post a Comment
Read more

It can't always be smooth sailing

By tclaughner - May 05, 2019
May 5, 2019 Hi all! We are safe and sound in Addis Ababa. I am writing this while laying in bed, before retiring for the night. It’s only 8:00pm here, but it’s been a long couple of days. Despite a nice nap this afternoon, not even the barking dogs, the calls to worship (from both the Greek Orthodox church and the mosque) nor the snoring roommates are going to keep me awake tonight. My trip started a bit rocky. After Lori dropped me off at the Memphis airport I sailed right through security, ate lunch, and made it to the gate in no time. After we had boarded, we were told that because of bad weather in Houston (I know,.. why am I flying to Houston from Memphis to get to Washington DC? Go figure) the flight would be delayed for two hours. So we got back off the plane and waited. I wasn’t too worried about my connection since my layover was three hours. I even said so much to Lori when I got off the plane (yes, I jinxed myself). Two hours later we get back on the plane and depart
Post a Comment
Read more 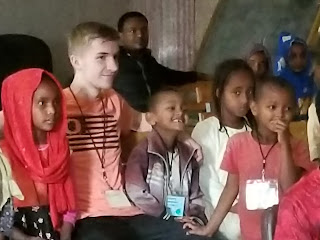 Hi all, Hard to believe it's been a month since we were in Ethiopia. The jet lag wasn't too bad this year (thank goodness, since I had to teach the morning after we returned). Thank you for all of the very nice comments about my blog. I enjoy writing it, even when I'm forcing myself to stay awake back at the hotel after a long day with the kids. Your affirmations keep me going! :-) One of the things we learned on this trip is that because one of the care points (Grace Baptist) is not at 50% sponsorship, it is difficult to provide regular food to all of the families. The care points try to make sure that all of the families are getting at least some food, so it seems that the staff are at times dipping into their own pockets to make sure everyone gets care. Thanks to the generosity of many people, we are now at about 40 sponsorships. If we could get just 10 more, all 100 of the children would be able to count on regular food deliveries to their homes. The cost is $3
Post a Comment
Read more
More posts